Great service I was kept informed about my order the whole time Thanks Jones.

Carnosine (beta-alanyl-L-histidine) is a dipeptide of the amino acids beta-alanine and histidine. It is highly concentrated in muscle and brain tissues.
Like carnitine, carnosine is composed of the root word carn, meaning flesh, alluding to its prevalence in animal protein. A vegetarian (especially vegan) diet is deficient in adequate carnosine, compared to levels found in a standard diet.
Carnosine can chelate divalent metal ions.
Carnosine can increase the Hayflick limit in human fibroblasts,as well as appearing to reduce the telomere shortening rate. Carnosine is also considered as a geroprotector. 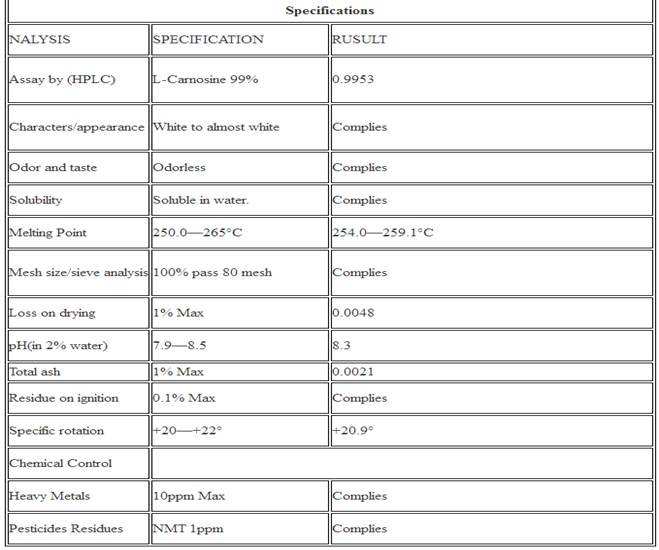 1.L-Carnosine is the most effective anti-carbonylation agent yet discovered. (Carbonylation is a pathological step in the age- related degradation of the body proteins. ) Carnosine helps to prevent skin collagen cross-linking which leads to loss of elasticity and wrinkles.

2.L-Carnosine is a Super Anti Oxidant that quenches even the most destructive free radicals

The hydroxyl and the peroxyl radicals, superoxide, and singlet oxygen. Carnosine helps to chelate ionic metals(flush toxins from the body).

3.It also acts as a regulator of zinc and copper concentrations in nerve cells, helping to prevent overstimulation by these neuroactive in the body substantiates all of the above and other studies have indicated further benefits.

2.Carnosine is β-alanine and histidine dipeptide composition, can be synthesized in animals

3.Carnosine in meat processing to inhibit fat oxidation and protect the role of flesh.

5.Carnosine as raw material to the antioxidant agents to treat senile cataract.